By Michelle Bandur Click here for updates on this story     ESCANABA, Michigan (KETV) — The heartache of a Korean War veteran from Woodbine, Iowa, searching on Facebook for his lost love from Japan captured the hearts of people all over the world. KETV NewsWatch 7’s story of his nearly 70-year […]

ESCANABA, Michigan (KETV) — The heartache of a Korean War veteran from Woodbine, Iowa, searching on Facebook for his lost love from Japan captured the hearts of people all over the world.

Just nine days after the story aired, Michelle Bandur got in touch with Peggy’s son and connected with Duane’s son. They set up a reunion between their parents.

Duane Mann never lost hope he’d get the chance to tell his former love why he never found her after he left Japan.

“This girl thinks I abandoned her,” he said. “That’s really the crux of why I’m here.”

It’s the moment he’s been waiting for nearly 70 years to give Peggy a message.

“I prayed that I would be able to do that face on face,” he said.

His long journey finally comes to an end.

That moment in 1954 when Duane last saw his first love when he was stationed in Yokosuka, japan.

Peggy was pregnant when the 22-year-old Iowa farm boy got his orders, the Navy was sending him back to the states.

He left Peggy behind with the promise he’d send for the woman he planned to marry.

But when Duane returned home from the Korean War, he discovered his father had fallen on hard times and spent Duane’s savings and then Peggy’s letters stopped coming, or so he thought. He discovered later his mother burned the letters.

“She didn’t want me to marry a Japanese girl,” said Duane.

One final letter arrived. Peggy wrote she lost the baby and married someone else.

“It was over. It set in, that idea that I abandoned her just wore me out and that’s not an honorable thing to do,” he said.

“I think it was a combination of guilt, confusion and sadness,” said Duane’s son, Brian Mann.

Brian Mann has supported his father’s lifelong quest to find his lost love so he can clear his conscience.

“We owe it to them to see if this is truly the Peggy that my dad is looking for,” said Brian Mann.

In early may, KETV Newswatch 7 reported on Duane’s long search, his universal story of heartbreak and hope.

The story went around the world.

Viewers emailed and posted obituaries and photos, wondering if they had found Peggy.

While Duane was in Iowa searching for Peggy, she wasn’t an ocean away in Japan, she was closer to him than he could have ever imagined, only 650 miles, across the Mississippi River and a few states kept them apart all these years.

“I thought ‘what the heck is going on here? What kind of scam artist is this one?’” said Rich Sedenquist, Peggy’s oldest son,

That’s what he thought when he listened to my voicemail, asking him if Peggy Yamaguchi was his mother.

“One way to find out,” he said. “I took my Bluetooth headphones over there, brought your video clip and I played it and she right away said, ‘I remember him. He really loved me.’”

Peggy is alive, alert, 91 years old and living with her Navy husband she married in 1955 in the same Michigan community of Escanaba where she raised her three sons.

“He’s able to fulfill his dream, his lifelong dream to find the woman that he met and fell in love with and 70 years later, what a wonderful story,” said Mike Sedenquist, Peggy’s youngest son. “Yep, it’s my mom. I love my mom.”

An article dated Feb. 3, 1956, from the local Escanaba newspaper, The Daily Press was the key to finding Peggy. A woman in Vancouver, Canada, who saw the original story online found the article. She said she was compelled to act and help Duane.

Wong is a researcher for the History Channel.

She found that old newspaper article with the headline, ‘ Toyko Bride Makes Life in Escanaba.’ The article had Peggy’s married last name and we found an address in the Upper Peninsula.

“I cannot imagine carrying around that heartbreak for 70 years,” Wong said. “I really hope this is just that opportunity to get closure and a release of all those years of worrying about it.”

Inside a conference room at the Island Resort and Casino outside Escanaba, the couple was reunited after all these years. They hugged, kissed, laughed and reminisced about their time together in Japan.

“I was shocked. I was shocked, ” said Peggy after learning Duane had been searching for her for seven decades.

“I was scared at first. I thought my mother and d=Duane wouldn’t talk like they did, but when they started smiling and talking it was all worth it. It was all worth it for me,” Rich Sedenquist said.

“It’s a great example as my dad has always been. Follow your heart, be a kind person and not be afraid to take a step other people won’t. It’s authentic to me,” Brian Mann said.

“I’m here to tell you that I didn’t abandon you at all. I just couldn’t find you,” Duane finally told Peggy.

“Thank you for remembering and save all the pictures, you must have loved me,” Peggy said and then hugged and kissed Duane.

If regret wasn’t enough of a reminder, Duane shared with Peggy how he keeps her close with photos in his billfold. He said he’s had them for 70 years and he transferred them to new wallets over the years.

Duane left an impression on Peggy too. Her son, Mike’s middle name is Duane.

“Duane. D-U-A-N-E. Now it just came to light how I really got that name and it wasn’t by happenstance, it was for a reason,” said Mike Sedenquist.

It may take a lifetime, but when you’re offered that moment, whether it be romance or resolve, just ask Duane Mann.

“It’s really been a freeing experience for me,” he said.

Seize the moment and never give up to find peace.

Please note: This content carries a strict local market embargo. If you share the same market as the contributor of this article, you may not use it on any platform.

Thu Jun 9 , 2022
HEMEL HEMPSTEAD, England — Phil Mickelson, making his first public appearance since February, would neither confirm nor deny that he has been suspended or banned by the PGA Tour for joining the rival LIV Golf tour. “I choose not to speak publicly on PGA Tour issues at this time,” Mickelson […] 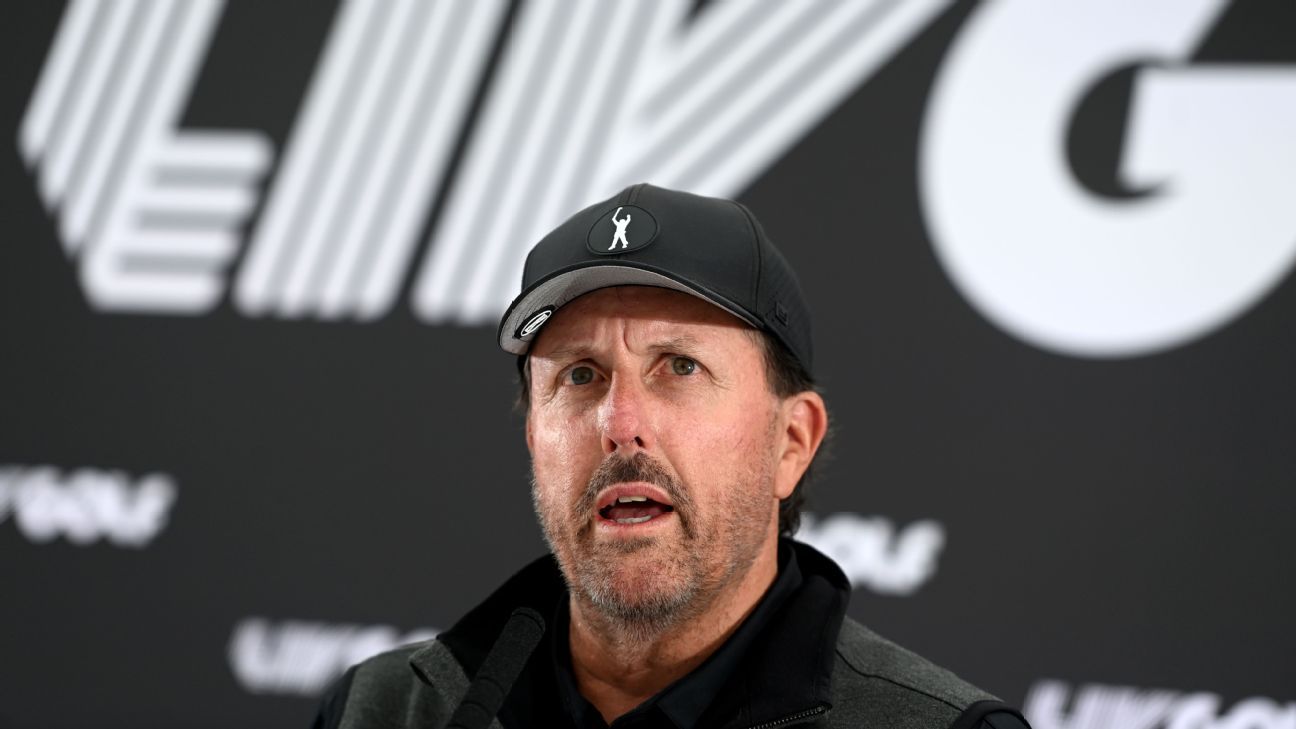