As Covid-19 swept across the world in the spring of 2020, Mo’min Swaitat, a Palestinian actor and filmmaker living in London, found himself stranded in his hometown, the West Bank city of Jenin. On walks through the quiet streets, he was drawn to the shuttered Tariq Cassettes, a music shop and record label he remembered from childhood that had closed down years ago.

Intrigued, Swaitat got in touch with the former owner, who let him while away the days of the pandemic searching through the dusty archive of tape cassettes on the second floor. In the process, he uncovered a treasure trove: long-forgotten music that animated Palestinian life during the 1980s, when the first intifada (uprising) broke out.

After purchasing many of the tapes and bringing five suitcases full of them back to London, it became his mission to digitise and re-release this window into the past.

“I listened to 10,000 tapes over eight months – lots of synth stuff and funk and disco, wedding music, revolutionary tracks. I even found recordings made by my uncle, who was in a Bedouin wedding band,” the 32-year-old said.

“One of the most special finds was this bright yellow tape with no information on it except a sticker with the hand-written word ‘intifada’.”

Swaitat listened to the album several times, captivated by the poetic lyrics describing a lost homeland and the struggle for freedom. On one occasion he left the tape rolling and realised that, after a few minutes of silence, the composer named himself as Riad Awwad. Awwad then thanked his sisters Alia, Hanan and Nariman for their help in creating the album, as well as Mahmoud Darwish – the Palestinian national poet – for writing the lyrics to one of the songs.

Swaitat couldn’t find any information about Riad online, but he did manage to get in touch with his sister Hanan, a famous writer and activist now in her 70s. She told him more about how the tape, called The Intifada Album, was created.

“My brother was a very talented musician. He was very moved by the intifada and the week it began [in 1987] he gathered us as a family in the living room in Jerusalem and asked us to help him ‘sing the song of the intifada’,” she said.

“He had a unique style and he made music about identity, which resonated with our people a lot. If you went down Salah al-Din Street in the old city, everyone was playing it.”

As the intifada grew increasingly bloody, Awwad ended up paying a high price for his art. Israeli forces confiscated most of the 3,000 tapes he had made from music shops, as well as cafes and businesses playing them, over fears the lyrics – some of which mention Molotov cocktails and throwing stones – would incite people to violence.

The 30-year-old was detained for several months, during which time he was tortured.

“He was never actually charged with anything, which was very common in the intifada,” said Hanan. “They asked him a lot about why he made the music, what he wanted to do with it.”

An electrical engineer by training, after his release Awwad started a music school for children in the West Bank, and went on to form a band called Palestinian Union.

Awwad died in a car accident in 2005. While Hanan wishes her brother was still alive to see his music being rediscovered, she said he would be thrilled to know his work is reaching new audiences.

“I was so happy when Mo’min got in touch to ask about re-releasing the album. It has historical significance and with the internet, anyone can find it,” she said.

On his return to London, Swaitat received funding from Jerwood Arts to start the Majazz Project, an online platform dedicated to restoring Palestinian musical heritage.

The digital release of Awwad’s Intifada Album was launched through the Majazz Project label at the end of 2021. The vinyl version, scheduled for launch in April, has already sold half of its run.

“The response has been amazing. I’ve had messages from young Palestinians and those in the diaspora telling me they loved it, or they bought it as a present for their parents who were young when it was originally released,” Swaitat said.

“We have plans to reissue more of the music – some rock, traditional Bedouin recordings and newer electronica.

“So much Palestinian culture has been lost or locked up in Israeli military archives, so it was magical to find this. It’s a journey through the past and the future of a whole people.”

Do PGA Tour pros ever grow tired of playing in Hawaii?

Mon Jan 17 , 2022
The courses, while picturesque, are now tame by PGA Tour standards, as evidenced by consecutive weeks with scores so low they’ve been breaking records. And the travel is intense, with players often making a journey of 4,000 miles or more, needing to build substantial cushions into their schedule to account […] 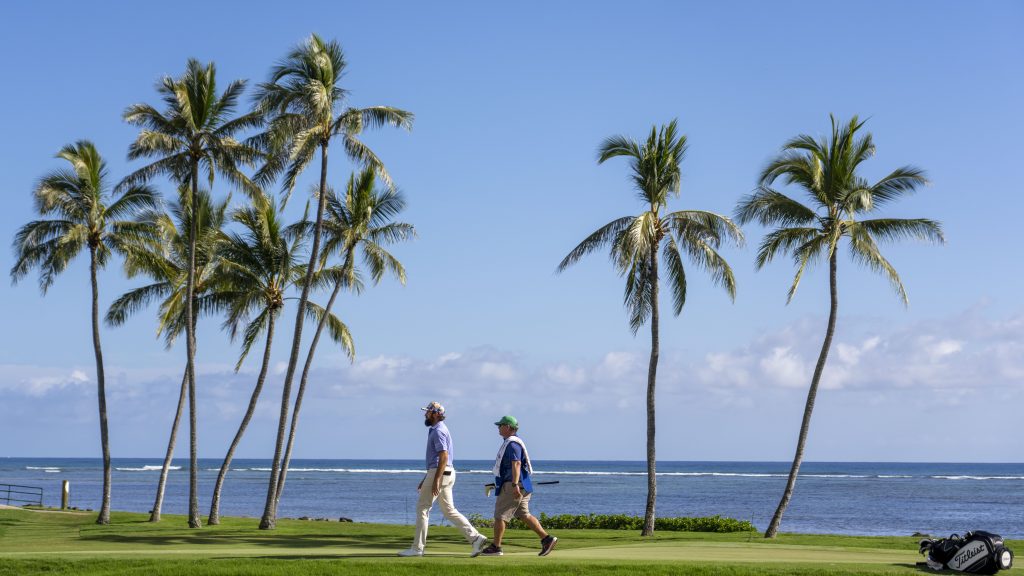