FAIR HAVEN, Vt. — Steve Pollinger received a phone call on a Friday afternoon three years ago. “There was a dog lost in the Adirondack Mountains for six months,” said Pollinger, who has owned Fair Haven Animal Hospital with his wife, Dr. Dru Pollinger, for 40 years. There was a […]

“There was a dog lost in the Adirondack Mountains for six months,” said Pollinger, who has owned Fair Haven Animal Hospital with his wife, Dr. Dru Pollinger, for 40 years.

There was a dog who needed help, and someone knew that Steve Pollinger could help.

Dexter was an abandoned dog who suffered unimaginable cruelty and post-traumatic stress from being beaten by his owner. Animal control in North River found the dog starving and fearful of human contact. The pup weighed only 17 pounds.

“He was on death’s door,” said Pollinger, who decided to adopt the canine, himself.

Dogs who suffer from post-traumatic stress are difficult to adopt because they stay at the back of the cage and won’t interact with people.

“If you went near him, he wouldn’t be aggressive,” Pollinger said. “He would just try to be invisible.”

Pollinger and his veterinarian wife spent two and a half years working with Dexter, who is a mixed breed of treeing walker coonhound, rottweiler, cocker spaniel, bluetick coonhound and supermutt.

The entire experience is written down in their new book “I am Dexter,” which is available on Amazon and all major book retailers for around $20. It can also be purchased at the Fair Haven Animal Hospital.

“Most people have a dog and many have rescues, and they all run into problems that they can’t deal with,” Pollinger said. “This is not a how-to book, but it’s how you get through an issue.”

The Pollingers, along with Helayne Rosenblum, spent the first year of the COVID-19 pandemic writing the story of Dexter. In the book, they share how they were able to rescue, rehabilitate and restore the dog. Some of it is told from Dexter’s perspective.

The Pollingers, who lost their son to an accidental overdose in 2011, were even more willing to help Dexter transform into a happy and healthy canine. Their son’s death is also addressed in the book.

“It’s a story of how I could make this dog whole again,” Pollinger said, “make him into a dog that’s loving and enjoying life.”

Pollinger said he has been approached about turning “I am Dexter” into a Netflix movie.

He is also writing a second book about abused animals, a topic that is difficult to discuss and explore. He is trying to find a way to make the subject less abrasive.

“It’s like the commercial from the ASPCA that’s so hard to watch,” he said.

Dexter, whom Pollinger described as the most frightened dog he’s ever seen, is now able to lie on Pollinger’s chest on the couch in their Whitehall home.

“So he’s come around,” he said, “and I wasn’t sure at the very beginning if I could make that happen, if he wasn’t too damaged. But I wasn’t going to give up.”

Gretta Hochsprung writes features and hometown news. She can be reached at 518-742-3206 or ghochsprung @poststar.com.

Sun Dec 26 , 2021
Sure, it looks unassuming now, but you should see Margaret Hubble’s house when it’s not “collapsed.” Photo: Gary Leveille It’s that most wonderful time of year when local nonprofits normally offer holiday house tours as fund-raisers. But with the “never-ending” COVID virus threat still canceling many of these gala events, […] 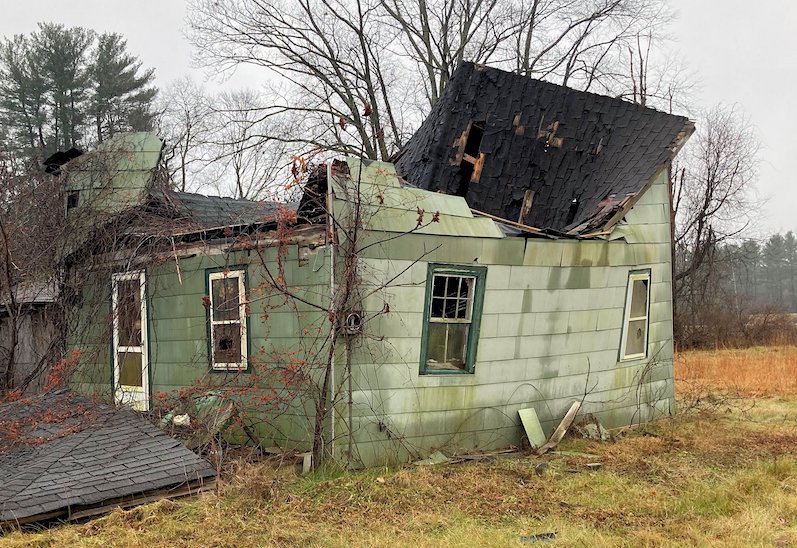