Leaning over an iPhone, the Mall of America salesman snapped on a case emblazoned with Gucci. He carefully applied tempered glass to the screen and a bejeweled protector to the camera lens, then handed it back to his customer. “See, my phone is going to be all blinged out!” she […]

Leaning over an iPhone, the Mall of America salesman snapped on a case emblazoned with Gucci. He carefully applied tempered glass to the screen and a bejeweled protector to the camera lens, then handed it back to his customer.

“See, my phone is going to be all blinged out!” she said.

“Yeah, blinged out!” the salesman replied cheerfully in a Pashto accent before tallying her total. “When you get a chance, come [back] to the mall. … Don’t forget us!”

He has mastered a pleasant rapport with his patrons, masking the melancholy that sometimes creeps up after leaving the war in Afghanistan. He has profound insights about peace and bloodshed, but he has learned to keep most of his conversations light.

His name is Khyber Sakhi, but American soldiers once knew him as John, their interpreter in Afghanistan’s deadly eastern borderlands.

Most U.S. soldiers came home after their service; it was too risky for Sakhi to go back to his. He is among nearly 21,000 Afghans whose support for the U.S. mission allowed them to come here on a Special Immigrant Visa, often sharing the trauma of returning veterans but lacking the same support.

Sakhi tries not to dwell on Afghanistan and the Taliban’s return to power while he manages phone accessory and repair kiosks at the mall 7,000 miles from his homeland. Still, the past haunts him when he leaves work in the evenings, away from the holiday songs and drone of commerce.

Relatives call late into the night to ask why he has not yet brought them here, fearful that his work for the Americans threatens their lives. Sakhi often lies awake, his hardships and those of his countrymen looming as formidably as the Hindu Kush mountains of theirorigins.

Eventually Sakhi drifts off. Finding true peace is another matter.

He was too young to remember his first escape.

Sakhi was born in 1977 in the province of Kunar, near Pakistan. Mujahedeen fighters took control after the Soviet Union invaded Afghanistan in 1979 and targeted his father, a high-ranking officer for the Afghan police, whom they accused of allegiance to the Russians. The family abandoned their ancestral home and fled to Kabul.

A decade later, civil war broke out and gunfire rocketed through the streets of the capital, hitting his front door. Sakhi’s family joined a mass of refugees streaming over the border to Pakistan. There, Sakhi married a fellow Pashtun, learned English at an institute, and watched the Sept. 11, 2001, terrorist attacks unfold on television. The following month, a U.S.-led coalition invaded Afghanistan to target Osama Bin Laden, his Al Qaida network and the extremist Taliban regime supporting them.

Sakhi returned to Afghanistan for a time to work at a photo printing business but struggled to support his growing family. In desperation, he considered migrating illegally to Europe, but his father talked him out of it. Then Sakhi’s cousin landed a job as an interpreter for the U.S. military and suggested he apply.

The elder Sakhi knew what it was like for enemies to presume the wrong allegiances, having sought refuge in Moscow during his son’s childhood.

But Sakhi’s dreams of being a doctor or engineer had faded amid the civil war, and in 2008 he accepted an offer to work as an interpreter after demonstrating his command of Pashto, Dari and English during interviews in Kabul.

“I had no other options,” Sakhi said. “I wanted to take a risk and to save my family, my kids’ future.”

His father relented, though he advised him not to go to their home province of Kunar. One of the most dangerous in Afghanistan, its rugged terrain along the Pakistan border has long been a hideout for insurgents. But when Sakhi received orders to go, he obeyed. He called his father from an airfield just before taking off.

The Black Hawk helicopter roared so loudly that he could not hear his father’s reply.

Sakhi shivered. Nobody had warned him how cold it would be in the mountains as he and the soldiers stood watch at an observation point that first night, waiting for a U.S. convoy headed their way. The hours lagged, and when morning came at last, he rejoiced at the warmth of the sun.

Then Sakhi and the other observers came down to the road and an improvised explosive device (IED) blew up, killing two Afghan Army officers and wounding a third. He saw a hand, a leg, a helmet scatter. Stepping over the blood, he helped gather their remains.

Sakhi found no time to linger in shock at his new base. He helped coalition forces train the Afghan National Army to use American M16s and armored trucks instead of the Russian equipment they knew. He participated in military patrols, search operations and checkpoints across eastern Afghanistan. They were not always welcome; once, jeering children threw stones at their convoy.

Americans gave Sakhi the pseudonym “John” to shield his identity from Taliban militants looking to retaliate against interpreters. He never left the base without wrapping a scarf over his face; he lied that he worked construction.

The U.S. mission relied on building the goodwill of citizens in the countryside, and Sakhi traveled around listening to the concerns of Pashto-speaking locals about education, security, the economy. He passed their comments on to his military team so they could help. Sometimes they brought school supplies and met with children and teachers.

“John’s work ethic and language skills are exceptional, and he has provided outstanding support as a translator for our squadron,” Lt. Col. Robert B. Brown later wrote on his behalf. “He … has demonstrated his reliability and dedication through countless combat and civil military operations.”

Sakhi hoped Americans would stabilize Afghanistan. He thought the Afghan National Army’s rank-and-file seemed committed to the cause, though he feared the leadership of his nation was corrupt. Sakhi came to believe he was serving his country, the U.S. and the world, even as he saw the mounting toll of their mission.

He watched an Afghan soldier excitedly tell his wife he was coming home, only to be killed hours later by an enemy sniper. “The next day we sent his dead body to his family,” said Sakhi. “These are the things I cannot ever, ever forget.”

Sakhi’s phone started ringing with threats from people warning him to stop working for the United States. Taliban fighters kidnapped his father in late 2011, taking him to the mountains and telling him to make his son stop working for Americans or be killed. Sakhi brought in influential elders and paid a ransom to secure his father’s release.

Soon after, Taliban fighters blew up a surrounding wall of the base where Sakhi was stationed, then came inside and began firing. Sakhi took shelter in the dining hall as troops rushed to stop them. After it was over, he saw the intruders’ slain bodies.

Such meaningless death distressed Sakhi, who believed that Allah created humankind to live in peace, not kill themselves and one another. Staying was becoming too perilous. Sakhi applied for a visa to come to America, and an array of U.S. Army leaders wrote letters of recommendation.

“He has been in more missions that have put his life in danger than most of the other linguists on our team and he has always performed with merit and exceptional bravery. … I would trust him with my life,” wrote First Lt. Nicholas Anderson.

“He will make a great contribution to the United States of America,” wrote Lt. Col. Kurt Kehoe.

The Obama administration was reducing military personnel in Afghanistan, and Sakhi’s team released him 2013. Then his visa was approved. Afraid for his safety, Sakhi waited until he reached the Kabul airport to call his family and tell them he was departing for America. They were distraught at another long separation, but again, there seemed no other choice for survival.

Sakhi’s friend and former interpreter Pacha Khan Hussaini invited him to Houston. Hussaini had landed there several months earlier and was working for a Pakistani immigrant at Cricket Wireless.

So Sakhi traded the dirt roads and hilly terrain of eastern Afghanistan for the massive highways of the Texas flatlands and went to work seven days a week selling phones. Without rental and credit histories, Sakhi and other Afghan interpreters struggled to find housing, and they banded together in an apartment with a one-time $1,000 payment each from the U.S. government.

Sometimes customers inquired about Sakhi’s background. “Thank you for your service,” they’d say when he explained, and that was all.

After six months, his wife and children joined him, and Sakhi’s boss invited a group of Afghan interpreters to work for him in Minnesota. In October 2014, Sakhi boarded a plane to Minneapolis, wondering if this would, at last, be the peaceful home he had been seeking for his family.

He was relieved to no longer scan his surroundings for threats, but his inner conflicts would only grow.

PIP? The PGA Tour incentivized social media use as far back as 2019

Fri Dec 31 , 2021
By: Sean Zak December 30, 2021 Phil Mickelson’s use of social media will definitely play a major role in his PIP standing at the end of the year. Instagram.com/PhilMickelson In the coming weeks, a formula will spit out a ranking of the most impactful PGA Tour players in 2021, and […] 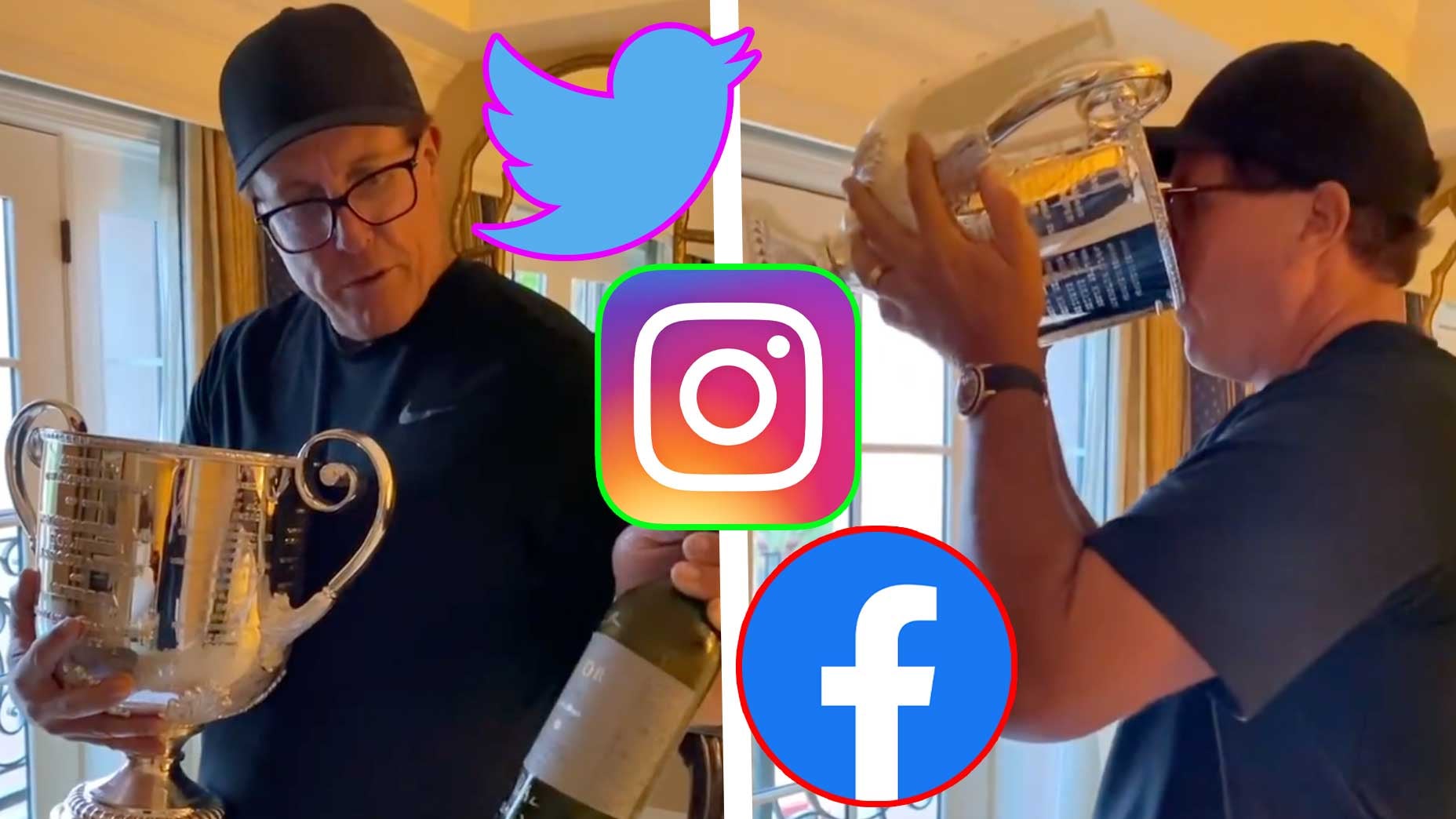