1/5 Faraday (Chiwetel Ejiofor) is a stranger on Earth. Photo courtesy of Showtime LOS ANGELES, April 24 (UPI) — Chiwetel Ejiofor said playing an alien in The Man Who Fell to Earth, premiering Sunday on Showtime, reflected his own human life. “Because of the nature of the part, you have […]

Faraday (Chiwetel Ejiofor) is a stranger on Earth. Photo courtesy of Showtime

LOS ANGELES, April 24 (UPI) — Chiwetel Ejiofor said playing an alien in The Man Who Fell to Earth, premiering Sunday on Showtime, reflected his own human life.

“Because of the nature of the part, you have to rely on your own experiences quite a lot,” Ejiofor, 44, said in a Television Critics Association Zoom panel.

The Man Who Fell to Earth is based on the novel by Walter Tevis, which first was adapted as a 1976 movie that starred David Bowie as the alien.

In addition to the Bowie adaptation directed by Nicolas Roeg, many other films about aliens were made in the years in-between. Ejiofor said he did not want to repeat the characteristics of any other aliens in film or on television.

“You can’t borrow any of that,” Ejiofor said. “The only thing you can really do is internalize it to try to understand it for yourself.”

Through internalizing Faraday’s journey, Ejiofor said he took him “on a personal journey.”

Faraday arrives on Earth with no language skills and learns English from the humans he meets. Ejiofor said humans can feel isolated among others even if they speak the same language.

“I feel like he does represent so many of us and the way that we interact,” Ejiofor said. “He develops more and more alacrity with language and speaking, but also with human nuance, with interpersonal dynamics.”

Ejiofor said he looked back on his early days as an actor when playing Faraday. As a teenager, Ejiofor performed in plays at the National Youth Theater and went to the London Academy of Music and Dramatic Arts.

Ejiofor’s breakthrough film role came in Steven Spielberg’s 1997 film Amistad. Before Amistad, Ejiofor said he remembered “feeling that sense of not being sure whether you belong, whether you can do this, whether you can be part of this profession and this work.”

Ejiofor said his family supported his career choice once they saw him perform on stage. His career includes an Oscar nomination for 12 Years a Slave, the film Kinky Boots and the Marvel Doctor Strange movies.

Faraday’s journey evolved from mimicking people he meets without understanding them to gradually assimilating into society. The London-born Ejiofor worked with dialect coaches and the actors playing the characters Faraday copies.

Faraday came to Earth when his planet became inhospitable. In the present day of 2022, Faraday immediately sees Earth on a similar path with the climate crisis.

Ejiofor said Faraday presents an interesting take on the climate change debate because he does not tell Earthlings what to do about it.

In addition to having a new name, Ejiofor confirmed that Faraday is a completely different character than Bowie’s Newton. Ejiofor said the show would explain those differences.

“These are two different distinct aliens, and they have their own characteristics that are very much rooted in their home planet,” Ejiofor said. “So all of that is kind of explained in part of the show, where Faraday and Thomas Jerome Newton are similar and where they are quite distinct.”

The Man Who Fell to Earth airs Sundays at 10 p.m. EDT on Showtime.

Tue Apr 26 , 2022
The focus of the trip was to see and learn about an assortment of base activities, including unit visits, K-9 training and one-on-one meetings for mission briefings. The players also spent time with service members and their families. In addition, they connected virtually with service members in Germany and Poland, […] 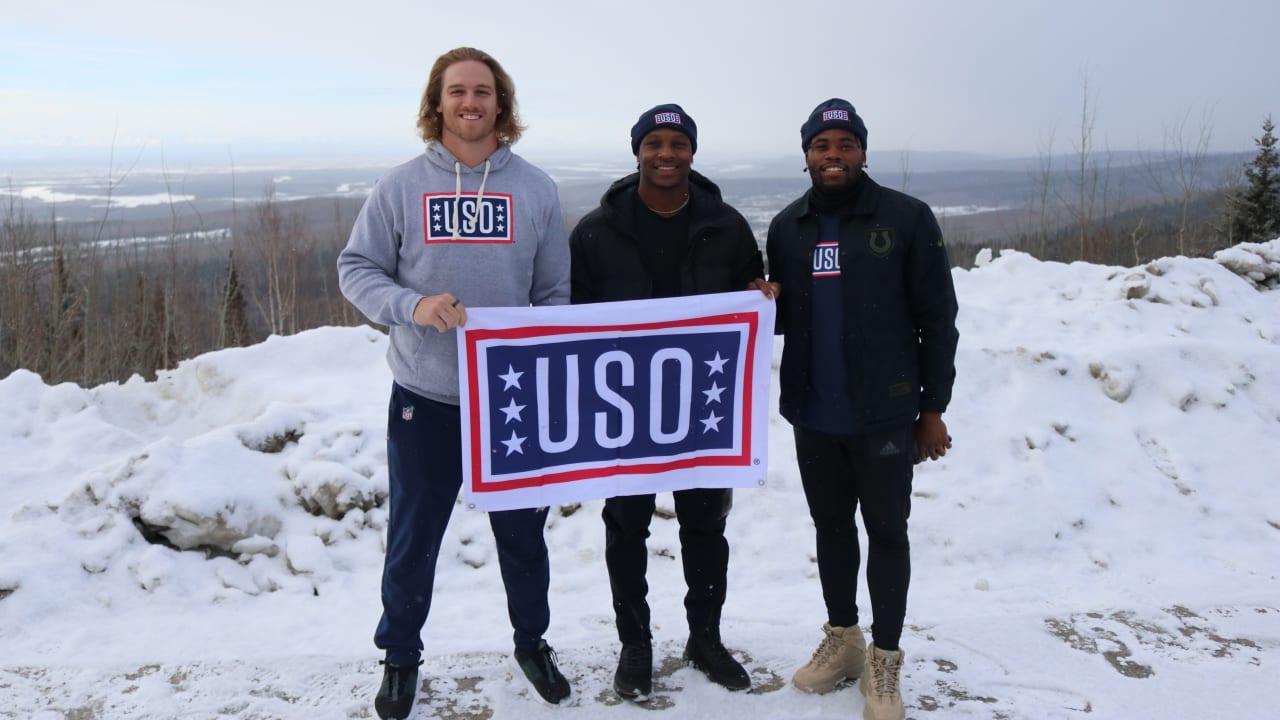