All journeys begin the same way — taking that first step. And it can be the toughest step you ever take, says James Schmidt of Huron, who recently published a book detailing his journey, both a physical journey and an emotional journey, through grief. It began when his wife, Patricia, […]

All journeys begin the same way — taking that first step. And it can be the toughest step you ever take, says James Schmidt of Huron, who recently published a book detailing his journey, both a physical journey and an emotional journey, through grief.

It began when his wife, Patricia, lost her two-year battle with cancer on Nov. 2, 2009, after 36 years together.

“The journey began in a deep, dark hole, one so deep I couldn’t see the light looking up,” begins the first chapter of his book, “One Man’s Grief and a Long Walk.”

Before her death, his wife made him promise that he would heal and learn to enjoy life again. But following her death, fulfilling that promise seemed overwhelming.

“I had to honor what she said,” Schmidt said. “I could see that by myself I was not moving forward.”

He discovered a grief support group, which helped provide him with coping skills and gave him the realization that he was not alone.

“That first step was deciding, yes I’ll go,” he said. He remembers sitting in the car that cold January night, mustering the courage to enter the church for the first grief support meeting. “When I went in, they said congratulations, you have accomplished one of the hardest things, just walking through the door for the first time.”

Thus began his emotional journey through grief. The operative word is “through” says Schmidt. “It’s not always going to be as hard as at first if you work on your grief, face it and work through it. You can’t jump over it or go around it. You have to go through it.”

His physical journey began less than a year following his wife’s death, when he convinced his son, Brian, to join him in walking the 109-mile George Mickelson Trail, which was once a railroad used by the gold mine, in the Black Hills. He also has a daughter, Christy. Both children live in Sioux Falls.

“Ever since I was a boy, I always wanted to explore,” Schmidt said. “The desire to walk a famous trail picked up my spirits. I needed a goal. I was 60. Most of my friends were my age or older and just laughed at me when I asked them to go along. Then I realized I knew someone who could use the trip as much as me. He had lost his mother. It could be good for both of us.”

Over a four-day period in late August 2010, he and his son focused on putting one foot in front of the other along the trail. “It was two journeys at the same time,” he said. “When we were walking the trail, we had the physical stuff in our backpack that we had to lug with us, plus the emotional baggage we carried with us, too.”

About three years ago, Schmidt began writing this book about his journey through grief and insights he learned on that challenging four-day walk along the trail with his son.

“It took a long time to write,” said Schmidt, who received encouragement from members of the James Valley Writers Group that he had joined. “Another author who wrote about Vietnam described what it was like to relive those experiences. He said it was a two-edged sword. One side hurt like everything and the other side cut out some of the pain. That’s kind of how I felt, too.

“One side heals and the other side hurts,” he said. “I had to dig deeper, go into the darkest part of my life to write this.

“Most books about grief are written by women for women, but there aren’t that many books specifically for men,” Schmidt said. “I’ve had almost 10 years of being a grief facilitator. You know you’ve gone through the hardest part when you can think of your loved one and smile and have pleasant memories rather than hurt. You can’t say I’m over it. It’s not completely over with, but it’s not as sharp.”

“We have no problem talking about our deceased loved ones,” he said. “My goal with this book is that it would help people heal and to have the courage to get support from others.

Each person deals with grief differently, and the best thing people can do to help is to just be there for them. “Don’t try to fix them, just listen and let them open up,” he said. “Even if we say nothing, if we’re just there for them, that’s better than trying to fix them.”

His book is available through Amazon, as well as at Don’t Spill the Beans in Huron, Wards Store in De Smet, Sweet Grass in Wessington Springs and at the Huron Public Library.

He will also be among local authors sharing their works at the Huron Public Library on Saturday, Oct. 23. He will be speaking at noon.

These 10 graduates earned their LPGA cards for 2022

Mon Oct 18 , 2021
Heading into the Symetra Tour Championship, the 20th event on this year’s schedule, six players had already wrapped up LPGA cards for the 2022 season. Four more followed after the 72-hole event at LPGA International. From 1999-2002, the official qualifying tour of the LPGA handed out three cards. Then from […] 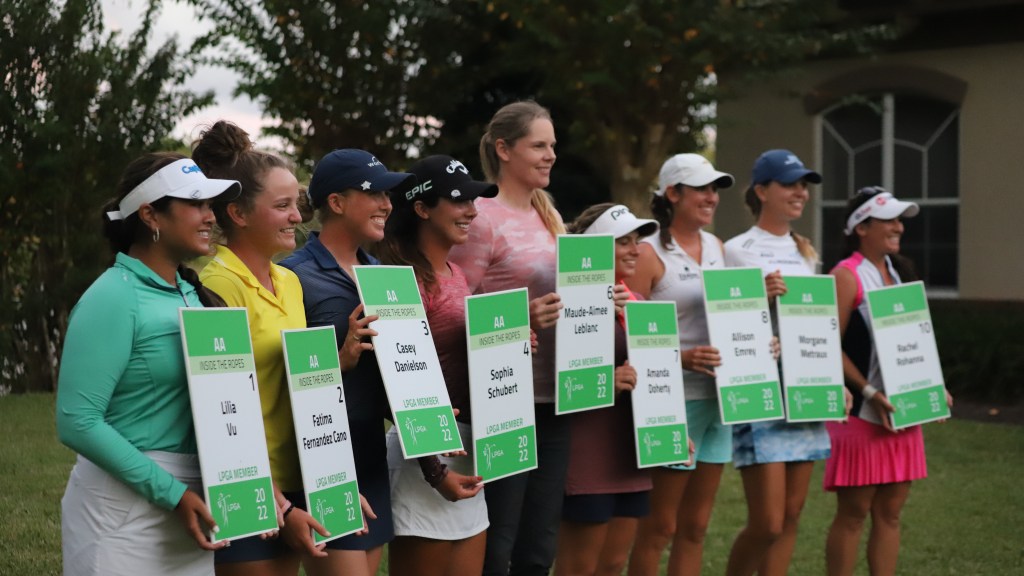