Table of Contents By the numbersMore money Travel in and out of the Joplin Regional Airport underwent a big change this year. Not only was there a switch in June from American Airlines to United Express, but for the first time in airport history, Joplin flights were dominated by leisure […]

Travel in and out of the Joplin Regional Airport underwent a big change this year.

Not only was there a switch in June from American Airlines to United Express, but for the first time in airport history, Joplin flights were dominated by leisure travelers rather than business travelers, according to Steve Stockam, airport manager.

“You look back at 2018 and especially 2019, that included 80% to 90% business travel. That was what we were known for,” Stockam said. “We had very little leisure travel at that point in time. The 2021 numbers are almost all leisure travel because a lot of businesses and such are still closed, and international markets are still closed.”

That poses a question, Stockam told the Joplin City Council during a meeting Monday night.

“It’s really interesting to know that there was a sector of the market that we were not tapping into,” he said. “Why we were not tapping into it at that time, I really have no idea. Maybe it was because of the availability of those flights. But we’ve been able to tap into that market, and we’ve done very, very well, which is exciting to me.”

United Express, a subsidiary of United Airlines, has offered service from Joplin to three hubs rather than one or two as there have been in recent years. The hubs are Houston, Denver and Chicago, and for these first months of service, traffic to Denver has slightly outpaced Chicago. Recently, travel to Houston has dropped, causing United to suspend many of those flights.

When the pandemic allows full service to return to the industry, Stockam said that could mean even larger passenger counts because of the component of leisure travel that has come to local air service.

Passenger counts to the three hub airports were highest that first month of United Airlines service, with 7,040 passengers. Of that number, 2,643 went to Houston, 2,279 to Denver and 2,118 to Chicago.

The travel outlook has changed suddenly with the discovery of the omicron variant of the coronavirus. Travel has depressed suddenly in just five days as new government restrictions have been imposed.

It’s hard to tell what will happen, but Stockam said it is important to keep the airline service going as much as possible. The industry is affected by a pilot shortage as well as COVID-19 restrictions.

“Leisure travel is still a big component of what we’re doing,” and travel holidays coming up may give passenger counts another boost, Stockam said.

July dipped to 5,021 total passengers, but Stockam said that was because the airfield at the airport was closed from July 23 through Aug. 2 for construction work on the intersection of two runways. In August, the passenger count went up to 5,614 and climbed to 6,142 in September.

“Over 30 years I’ve been dealing with the industry, and I’ve never seen the industry like it is now,” Stockam said. “They don’t act the same, they don’t react the same. They are trying to make it as profitable as possible and keep as many folks working as they can.”

He said he did not have any predictions.

“We hope we can continue to ride through this,” he said. “We have a very good partner with United. Their service has been very good, very stable, and we appreciate everything they’ve done for us. But understanding where we are going to be a year from now is extremely difficult.”

The Infrastructure and Investment Jobs Act will bring the Joplin airport quite a bit of money, officials said. It will be funding on top of the airport’s annual $1 million federal allocation to provide services.

“Small and medium-sized airports like ourselves stand in a great window of opportunity to receive additional funding for capital projects,” Stockam said. “One thing we know right now is that our entitlement monies will double. We are going to receive about $1,033,000 for the next two years.”

There also could be money for projects on the airport terminal building. The FAA tower is 12 years old, and its radios need to be replaced; that money could also come from the infrastructure funding.

United is operating at the Joplin airport this year with a federal subsidy of $1,222,934 under the Essential Air Service program.

More is happening this week at the airport. A $14.5 million project that started earlier this year to rebuild the airport’s main runway and replace adjacent runway lights has been completed, and a dedication ceremony is scheduled for 1 p.m. Thursday, Stockam said.

Tue Dec 14 , 2021
Hyatt Hotels and Apple are working together to offer a plastic key-free experience to guests, the hotel chain announced Wednesday. Using Apple Wallet, guests will instead be able to use their phones to unlock hotel doors and other key-protected areas, such as elevators, fitness centers, and pools.  The new digital […] 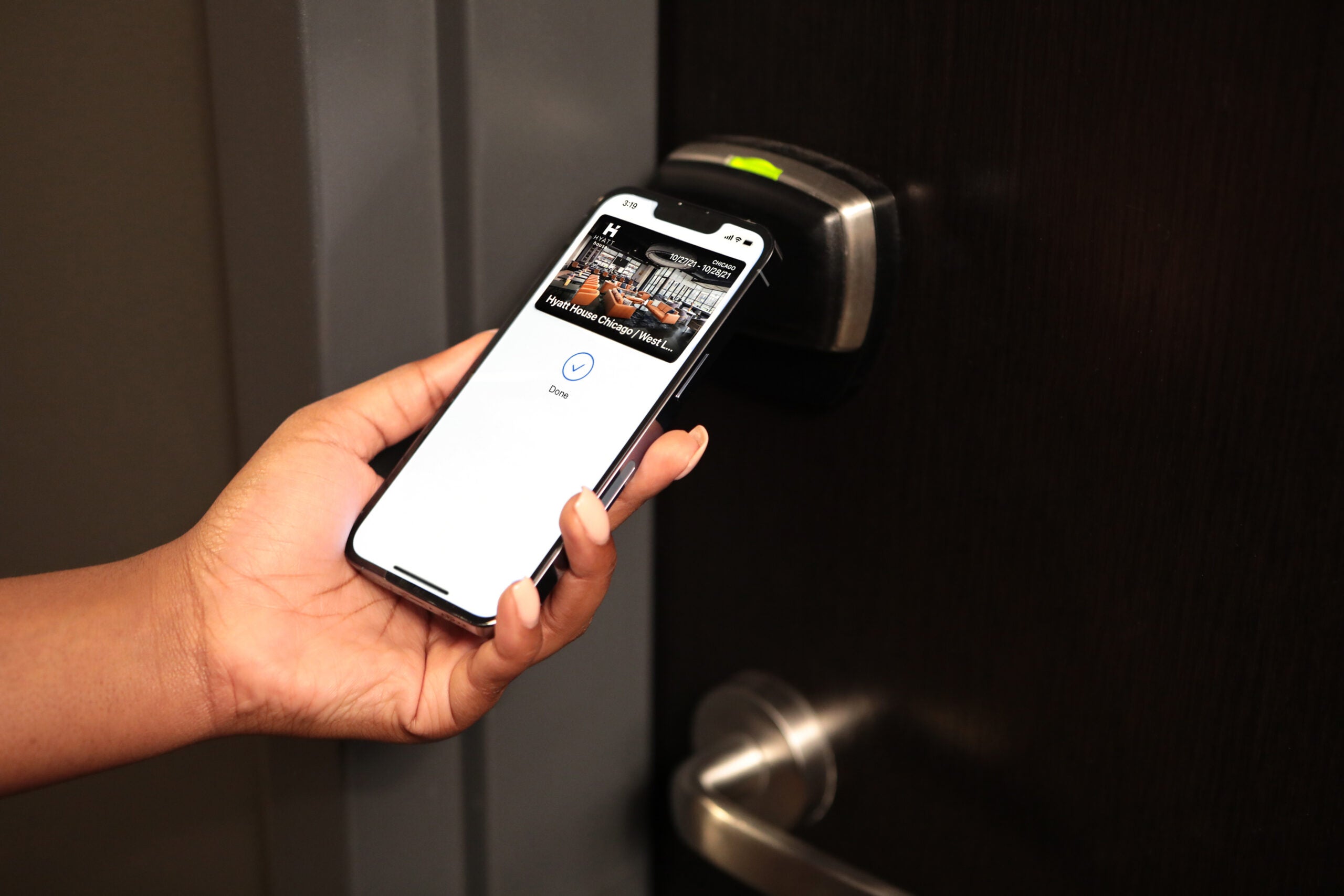