LOS ANGELES — Defending FedEx Cup champion Patrick Cantlay isn’t a fan of the PGA Tour’s Player Impact Program, which awards $50 million to players for their appeal and popularity on social media. Cantlay, the No. 3 player in the world, said he would rather see the money go to […]

Cantlay, the No. 3 player in the world, said he would rather see the money go to players for their performance on the course. Only the top 10 players in the PIP standings are rewarded.

“I think I’m old-school in the respect that I would like the money to be doled out relative to play and I don’t think the PIP does that,” Cantlay said during a news conference at Riviera Country Club on Tuesday. “It may be the first departure that the tour has had from rewarding good play to rewarding social media or popularity presence, so I don’t like that departure.”

Phil Mickelson, who became the oldest player to win a major at the 2021 PGA Championship at Kiawah Island, declared himself the winner of the $8 million top prize in December. Tiger Woods, who didn’t play in a tournament in 2021 after he was seriously injured in a car crash, reportedly claimed the $6 million second prize. The total PIP pool for 2021 was $40 million.

Players are measured by an “Impact Score,” which is determined by using five metrics, including their popularity in Google searches, their Q rating, the Nielsen Brand Exposure rating, the MVP index rating and their Meltwater Mentions, which measures the frequency that a player generates coverage across various media platforms.

Two-time major champion Collin Morikawa also said the PIP money could probably be better used to reward players in other ways, but he wasn’t sure how to do it.

“How many other leagues or sports pay out the top 10 players for what they do for the game?” Morikawa said. “Now, it is a good thing and it is a bad thing because I think, you know, do guys deserve more? Do guys that have really moved the needle, that have produced what we have done for the game, do they deserve more? Yes, right? They’ve changed our game and our game is constantly changing and evolving and opening it to more people, that’s the biggest thing.”

Morikawa, the No. 2 player in the world, reportedly finished out of the money in 11th place in 2021.

Sun Feb 20 , 2022
While the COVID-19 pandemic has devastated the bottom line of the global airline business–with government assistance keeping many carriers afloat–a host of startup carriers have emerged during the crisis. The key, said executives from startups speaking Feb. 15 at the Routes Americas conference in San Antonio, Texas, is to […] 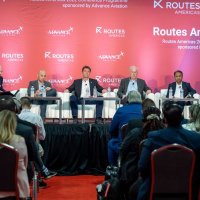