The president toured damage in Louisville and then met with survivors of the Marshall Fire. BOULDER COUNTY, Colo. — President Joe Biden visited Colorado on Friday to tour the Marshall Fire damage in Boulder County. > Watch President Biden’s full remarks lower in the story. Biden was joined by First […]

The president toured damage in Louisville and then met with survivors of the Marshall Fire.

The president arrived in Colorado on Air Force One shortly after 2 p.m. and then traveled to Rocky Mountain Metropolitan Airport (RMMA) on board Marine One.

Once in the area, the officials toured an area of Louisville that was damaged by the Marshall Fire. Following the tour of the damage, the president met with survivors at the Louisville Recreation & Senior Center and delivered brief remarks about the federal response to the fire.

He and the first lady thanked firefighters and other first responders who fought the fire and have worked in its aftermath.

“I intend to do whatever it takes for as long as it takes to support you,” Biden said, adding that he has worked closely with Polis and the Colorado delegation on federal aid and assistance.

Biden talked about the role that climate change played in the Marshall Fire and in last year’s Grizzly Creek fire and the mudslides that followed on Interstate 70 near Glenwood Springs.

>Video below: President Biden’s remarks about the Marshall Fire.

“We can’t ignore the reality that these fires are being supercharged by changes in the weather,” he said as he talked about the need for more renewable energy options.

In a statement, Neguse said Boulder County communities cannot expect “to bear the burden of this disaster on their own.”

“We cannot expect our communities to bear the burden of this disaster on their own,” he said. “We must bring the full force of the federal government to bear as our communities work to rebuild and recover. I’m deeply grateful to President Biden and his administration for authorizing a swift disaster declaration this past weekend to begin the flow of federal funds to our community, and I look forward to hosting him on the ground on Friday to share firsthand the powerful stories of Boulder County’s resilience and strength.”

The Community Foundation of Boulder County said Tuesday it has approved a grant to begin immediately dispersing $5 million in direct aid to those impacted by the Marshall Fire last week. That is just a portion of the $12 million donated to the wildfire relief fund.

Meanwhile, the investigation into the cause and origin of the fire could take weeks or months, officials said at a news conference Monday.

Two people were missing, 1,084 structures were destroyed. That includes 550 in Louisville, 378 in Superior, and 156 in unincorporated Boulder County. 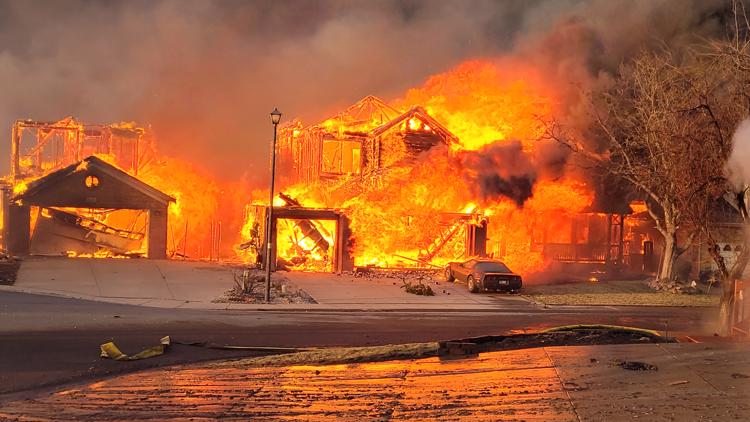 >Video below: President Biden arrives in Colorado to survey damage from the Marshall Fire

Days after flames and smoke were seen emanating from what might be the source of the wildfire, investigators continue to eye property tied to a religious sect.

Members of the global religious group live just south of the city near Highway 93 and Marshall Road, where smoke and flames were captured on witness video mid-morning last Thursday.

This week, Boulder County Sheriff Joe Pelle acknowledged the group’s land in this location is tied to the investigation and stressed it could take weeks or months to find an official cause of the fire.

So far, nobody has been charged or accused.

Twelve Tribes is a religious sect with communities from Japan to Boulder that operates more than 20 Yellow Deli shops, including a location on Pearl Street in the city. The group says it tries to live a lifestyle reflective of the early Christian church.

> Top stories curated daily just for you! Sign up for the 9NEWSLETTER to get can’t-miss stories, Next and Broncos content, weather and more delivered right to your inbox.

MORE WAYS TO GET 9NEWS

HOW TO ADD THE 9NEWS APP TO YOUR STREAMING DEVICE

ROKU: add the channel from the ROKU store or by searching for KUSA.

For both Apple TV and Fire TV, search for “9news” to find the free app to add to your account. Another option for Fire TV is to have the app delivered directly to your Fire TV through Amazon.

Thu Jan 13 , 2022
We don’t see a lot from Japanese automaker Mitsubishi in the US. The company had some very appealing sports cars, such as the Mitsubishi Evo and the Mitsubishi Eclipse. Unfortunately, those cool vehicles were discontinued in the US, and the only Mitsubishi model you’re likely to see cruising the streets […]