The owners of the Renaissance Cleveland Hotel plan to rebrand the landmark property as the Hotel Cleveland, returning the city’s second-largest hotel to its historic name. A consultant working on extensive renovation plans for the 491-room hotel shared the rebranding news Friday, Sept. 17, during a virtual Cleveland City Planning […]

The owners of the Renaissance Cleveland Hotel plan to rebrand the landmark property as the Hotel Cleveland, returning the city’s second-largest hotel to its historic name.

“It will be considered an upgrade from the Renaissance Brand,” said Steve Goodman, a California-based consultant assembling financing for what will be a $62 million overhaul.

Skyline Investments Inc., the Canadian hospitality company that has controlled the hotel since 2015, already has spent $14 million on a roof replacement; heating, cooling and ventilation upgrades; and facade repairs. The next wave of renovations will span the guest rooms, the entrances, the lobby, a reimagined restaurant and other public areas — along with costly window replacements.

Construction could start in November and will be complete by late 2023, Goodman said during an interview.

“It’s a big hotel. It’s a lot of work,” he said, explaining the long timeframe. “The hotel has remained open and will remain open during the renovation.”

Skyline also plans to re-create the Hotel Cleveland sign that once rose from the roof, looming over Public Square.

“It’s a fairly pricey reconstruction,” Goodman said, “but I think it’s kind of the anchor of the whole idea.”

Hotel Cleveland opened in 1918 as a 1,000-room property in the heart of downtown. Reconfigured and rebranded several times, the hotel has flown the Renaissance flag since the early 1990s. The last major renovation of the ballrooms and the common areas took place in 1990, according to documents prepared by preservation consultant Sandvick Architects.

Toronto-based Skyline, whose shares are publicly traded on the Tel Aviv Stock Exchange, owns the property through a 50-50 joint venture with a silent partner. Regulatory filings dating back years mention potential renovations at the Renaissance.

But the project has been tough to pull off. In July, Skyline failed to win competitive state preservation tax credits to help finance part of the work. The hotel did not score well in the race for credits, where properties that are largely or completely vacant earn higher marks.

The Ohio Department of Development considered the Renaissance to be fully occupied, even though the ballrooms and other event spaces — the subjects of the tax-credit application — have been sitting dark during the pandemic, said Peter Ketter, Sandvick’s historic preservation director.

Goodman said that Skyline has found ways to fill funding gaps, though the process has taken months longer than expected. The project will draw on federal historic preservation tax credits, along with financing tied to energy-efficiency and environmental upgrades through the Ohio Water Development Authority and the Ohio Air Quality Development Authority.

The deal might include federal New Markets Tax Credits, which are meant to spur investments in real estate and business projects in low-income areas. The Census tract where the Renaissance sits is eligible for the program and is classified as severely distressed.

And the project could involve tax-increment financing, a mechanism that reallocates a portion of the new property-tax revenues created by development to paying off debt. The city of Cleveland is laying the groundwork for such an agreement, which prompted the discussion at Friday’s planning commission meeting.

The commission approved preliminary legislation related to the TIF, sending it along to Cleveland City Council for discussion. But the legislation does not formally exist. On Friday, there was no ordinance number, and related documents were not available online.

“I have not agreed to introduce this piece of legislation yet,” said downtown Councilman Kerry McCormack, who expressed frustration with what he characterized as a backward public process.

McCormack said he does not necessarily have objections to the project, or the financing proposal. But, he said, “I haven’t read it yet. I read my stuff.”

Skyline’s push on the Hotel Cleveland project is occurring amid a flurry of activity near Public Square.

Just north of the Renaissance, the Sherwin-Williams Co. plans to break ground late this year for its new headquarters, set to open in 2024.

Renovations are starting at the 55 Public Square office tower, where the building’s lower floors will become 205 apartments. Construction is ongoing at 75 Public Square, another office-to-residential conversion.

And Bedrock, the Detroit-based owner of the mall at Tower City and parking behind it, unveiled a concept this week for remaking an expansive stretch of the downtown riverfront with public spaces, housing, offices, retail and restaurants. That vision could take 30 years to realize, the company said.

Tue Sep 21 , 2021
Sign up for The Brief, our daily newsletter that keeps readers up to speed on the most essential Texas news. DEL RIO — The Biden administration said Saturday it was accelerating deportation flights and sending 400 federal agents to Del Rio to seize control of an escalating crisis as thousands […] 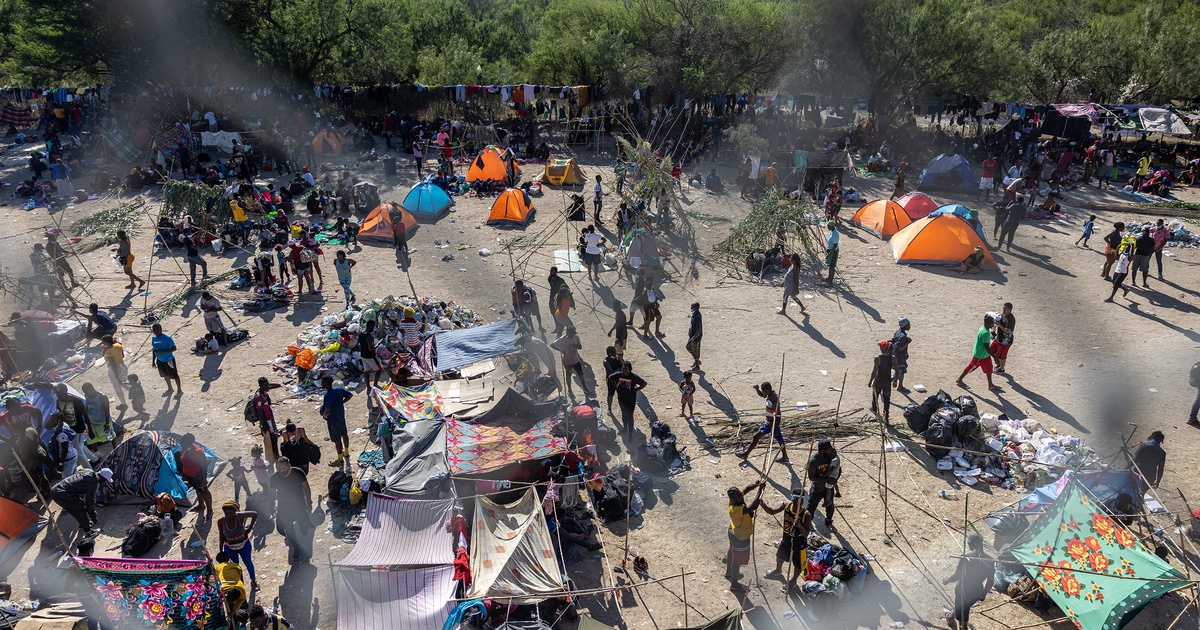