Golf can be an infuriating game. You think your ball is destined for the bottom of the cup, but a little too much speed or a tiny break forces the ball to scratch the hole without dropping.  On the PGA Tour, that can be the difference between a coveted victory or […]

Golf can be an infuriating game. You think your ball is destined for the bottom of the cup, but a little too much speed or a tiny break forces the ball to scratch the hole without dropping.

On the PGA Tour, that can be the difference between a coveted victory or a lump sum of cash.

So while Tour pros usually want to forget those gut-wrenching strokes, let’s do the opposite and remember some of the most brutal lip-outs from 2021.

Although this wasn’t as memorable as Lefty missing a 59 by lipping out No. 18 in Round 1 of the 2013 Waste Management Phoenix Open, Mickelson rang in another year on Tour with a 540-degree lip out from a few feet out only six holes into his 2021 campaign. Contrary to 2013, he didn’t go on to win the event, but on-par with ’13, he notched a major win a few months later. So maybe Mickelson’s vicious lip-outs were a good luck charm?

After forcing a playoff with Harris English, Kramer Hickok was looking for his own walk-off win on TPC River Highlands’ closing hole as his college roommate, Jordan Spieth, had in 2017. The 29-year-old nearly got his chance on the second playoff hole after English’s approach shot landed in the bunker, but Hickok’s 43-foot putt for birdie lipped out as he dropped his putter and placed his hands on his head in disbelief.  Three tries later on the par-4 17th, Hickok had another birdie putt to win, however, the ball tapped the right side of the hole and didn’t fall.

The two continued to exchange pars with darkness looming and on the eighth try, Hickok fell short in his quest for his maiden Tour win and he’s still searching for it.

After three consecutive top-three major finishes, the 39-year-old South African found himself with a shot at a consolation prize one week after a final-round 71 cost him his second claret jug. On TPC Twin Cities’ par-5 18th, one of the Tour’s hardest holes, he hit his tee shot into the left rough and had to hole out for eagle from 95 yards to tie the clubhouse lead. Oosthuizen’s wedge shot landed left of the hole but the ball’s backspin almost created a top highlight.

“It was tracking the whole way,” Oosthuizen said. “Even while it was rolling out, I the whole time thought it was gonna get there and then it just had an end break at the end there and stopped about an inch short. That was a bit frustrating.”

Cameron Champ likely would have surpassed Oosthuizen for the win anyway, but that shot was exactly like Oosthuizen’s year – he almost had it but couldn’t seal the deal.

Hideki Matsuyama, Sam Burns and Abraham Ancer found themselves tied at the end of 72 holes in the summer heat of Memphis. On the first extra hole, the par-4 18th, Matsuyama was millimeters from notching the win but a 20-foot birdie putt lipped out. Then the next time down No. 18, a 6-footer for Burns did a full 180 without sinking, gifting Abraham Ancer his first Tour win.

Hideki Matsuyama and Sam Burns each lipped out crucial putts in the playoff Sunday at the WGC-FedEx St. Jude Invitational.

About 48 hours before Bryson DeChambeau would fall to Patrick Cantlay in a six-hole playoff, DeChambeau found himself 6 feet from the 13th sub-60 round in Tour history. However, his putt would roll left and 36 holes later, he found himself tied with Cantlay as the August sun started to set over Caves Valley.

In the playoff, DeChambeau stumbled repeatedly with his putter and on the second extra hole, a 6-footer to win kissed the left of the cup. With a chance at redemption on the next hole, the par-3 17th, he left his tee shot 18 feet from the hole, but it was groundhogs day with the flatstick. The ball once again hugged the left of the cup without dropping and DeChambeau sank his head in agony. After three more bonus holes, he became the first player in Tour history to post a 261 without winning. 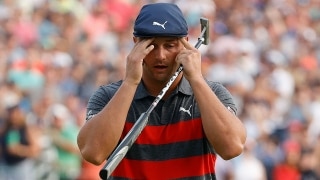 With the 24-year-old rookie co-leading the event, he drove to the green on the Country Club of Jackson’s par-4 15th. With the ball sitting about 58 feet from the hole, Theegala’s chip for eagle did a full circle around the cup without going in and the former Pepperdine Wave fell to the ground in shock.

“It literally looked like more than a 360,” Theegala said. “I didn’t have the greatest vantage point, but it was literally going right at the stick, and I’m like, ‘OK, that’s in, with good speed.’ I can’t believe that lip-out.”

Tue Dec 28 , 2021
Dec 23 – Welcome to the home for real-time coverage of markets brought to you by Reuters reporters. You can share your thoughts with us at [email protected] TRAVEL AND LEISURE STOCKS LEAD GAINS (0849 GMT) The pandemic is stealing the stage once again, with some positive vibes for risky assets […]