The Sussex County Council, at its Tuesday, Oct. 12, meeting, is expected to vote on whether to allow the Carl M. Freeman Companies to build a hotel and restaurant off Route 54 near Fenwick Island. The vote on the controversial matter will come more than two months after dozens of […]

The Sussex County Council, at its Tuesday, Oct. 12, meeting, is expected to vote on whether to allow the Carl M. Freeman Companies to build a hotel and restaurant off Route 54 near Fenwick Island.

The vote on the controversial matter will come more than two months after dozens of local residents, as well as the lawyer representing Freeman, outlined reasons for and against the project at public hearings at the July 27 council meeting and at the July 8 Planning & Zoning Commission meeting. The commission did not recommended approval of the request, on a tie vote of 2-2, with one commissioner abstaining.

Following lengthy testimony at the county council meeting on July 27, Councilman John Rieley addressed the crowd that was still assembled in the council chamber well after 5:30 p.m.

“You have to understand, we’ve been presented with a tremendous volume of information,” he said just before the council voted 4-0 to defer a decision. Earlier that day, Councilman Doug Hudson had recused himself and left the council chamber.

The council adjourned on July 27 without saying when the matter would again be on its agenda. It was finally scheduled on the agenda for the Oct. 12 meeting, and several weeks passed.

Council President Michael Vincent and Councilman John Rieley refused to comment on the project this week or reveal how they planned to vote. Both said they were advised against commenting, by legal counsel.

Those in opposition to the project feel as strongly as they always have, Kirsten McGuigan-Kleinstuber, who helped form the Fenwick Protection Project, told the Coastal Point this week.

If the council approves the project, opponents will explore what recourse they have and continue to fight “to the very end,” she said.

“I would love to be there,” she said about the Oct. 12 council meeting.

Freeman is proposing the construction of a 70-room hotel and 8,500-square foot restaurant on a 9.2-acre parcel just west of the ditch that connects Little Assawoman Bay to the Big Assawoman Bay, which is partially wetlands. It would be off Route 54 near Lighthouse Road, in the vicinity of Treasure Beach RV Park & Campground and of Papa Grande’s and Catch 54 restaurants.

“Everybody who is opposed is on the same page,” McGuigan-Kleinstuber said. “We are all hoping the council votes in favor of what the constituents want, and whatever we can do, if they make a decision in favor, we will do. So many homeowners along Route 54, from my experience, are against it. Some of them have spoken to lawyers.

“I understand the council can’t tell private land owners what they can do with their land, but this doesn’t fit in with the character of that area. We will fight it any way we can,” she said.

Samantha Danaher, who was also involved in forming the Fenwick Protection Project, was among those who spoke at the P&Z public hearing, saying, “How disappointed our loyal tourists will be when they are driving east and that beautiful land is gone that welcomed them to the beach.” She said a hotel and restaurant go against the character of the Quiet Resorts.

The location is close to the Delaware-Maryland border.

“It would sadden me to see Delaware become as populated as Ocean City is, with all the hotels and high-rises,” she said.

What she grew up with “is being stripped up from us faster than we can keep up with it,” she said.

“Being able to run through marshlands as kids, run through all the woods that have been torn down. Now this piece of land is the last piece of picturesque land on Route 54,” she said, asking for the land to be preserved.

After the Planning & Zoning Commission failed to recommended approval of the project, a pleased McGuigan-Kleinstuber said the commission made the right decision. She has been concerned “about the impact on the community, the general quality of life,” she said.

“We all live here because it’s ‘The Quiet Resorts.’ We enjoy the natural beauty, the kind of a slower way of life. In Fenwick, we only have a few hotels. This is not a big hotel town. I think that’s why people live here and like it here.

“Wetlands are in that whole area. I’m sure a buffer zone will be required before they can build, but even just putting in impervious surfaces — pavement — and developing that area will have a major impact on the whole,” she said.

Others, at the public hearings, spoke against overdevelopment that, they feared, would force them out of their homes and said when rescuing the injured by airlifting them to a hospital, the property in question is one of the safest areas for a helicopter to land because other locations have too many poles, wires, people and vehicles.

Opponents also said they were worried there won’t be enough parking at the hotel, that 70 rooms will mean hundreds of people causing pedestrian traffic and traffic jams, and called for an independent traffic impact study. They asserted Freeman has no right to “rape our land and take our wetlands,” saying that it’s possible on certain Saturdays to jog from Route 54 to the beach in Fenwick Island faster than driving there. “Enough is enough,” they said.

Farmer Henry Bennett, whose ancestors once owned the property Freeman wants to build on, said he loves Sussex County, but the constant “rubberstamping” of development makes life difficult. Agriculture is still the No. 1 business in Delaware, but it is hard to get equipment from one side of the road to the other because of heavy traffic, he said.

“Surrounded by sprawl, we can’t continue to farm. I strongly oppose this project, and I think it’s kind of ridiculous to have to take off work in the middle of our busiest season to come down here and ask the county council not to approve this project. … Your property rights end when they infringe on ours,” Bennett said.

He asserted that landscaping around the hotel and restaurant will cause toxic chemicals to flow into the bay during high tide or a storm.

“Nobody will be catching crabs … or anything for generations,” he predicted.

At the county council public hearing, Rieley commented, “Saturday morning on Route 54 is no fun, let’s be honest. And we’re going to add something like 1,200 more trips. … It’s like blowing more air into a balloon that is pretty full already,” Rieley said.

But Attorney James Fuqua, representing Freeman, said the worst of summer traffic is usually over by the end of July, that the area is a tourist destination “and that’s the way it is.”

Fuqua told the council that a land-use decision is not a popularity contest and shouldn’t be made by them based on objections heard at the P&Z hearing, at a council meeting or in writing.

He said Freeman isn’t automatically entitled to approval, but because the project is on a major road, would be served by central water and sewer, is a mile from Fenwick Island and seeks to maintain the county’s goal as a tourist destination “those considerations, factually and legally, do entitle them to your approval.”

Fuqua assured the council that there would be 237 parking spaces at the hotel — more than required — with parking areas lit, and that the restaurant would be upscale and not a fast-food establishment. The outdoor dining area would be on the west side of the building, with a view of wetlands and the bay. Dining outdoors would end by 10 p.m., and music and entertainment prohibited outdoors, to be sure it wasn’t noisy.

Also planned is a landscaped buffer area along Route 54 and the west side of Bennett Avenue and throughout the parking area.

Fuqua said Freeman is asking for a conditional use and not a change of zone, allowing the council to impose conditions on the project if it is approved.

The Hidden Gem of Sports Travel: USMNT Away

Sun Oct 10 , 2021
One of the essential, and unsung, experiences in American sports fandom requires you to leave American soil altogether. Every four years, the United States men’s soccer team embarks on a monthslong journey to qualify for the World Cup, bouncing around North and Central America and the Caribbean for an excruciatingly […] 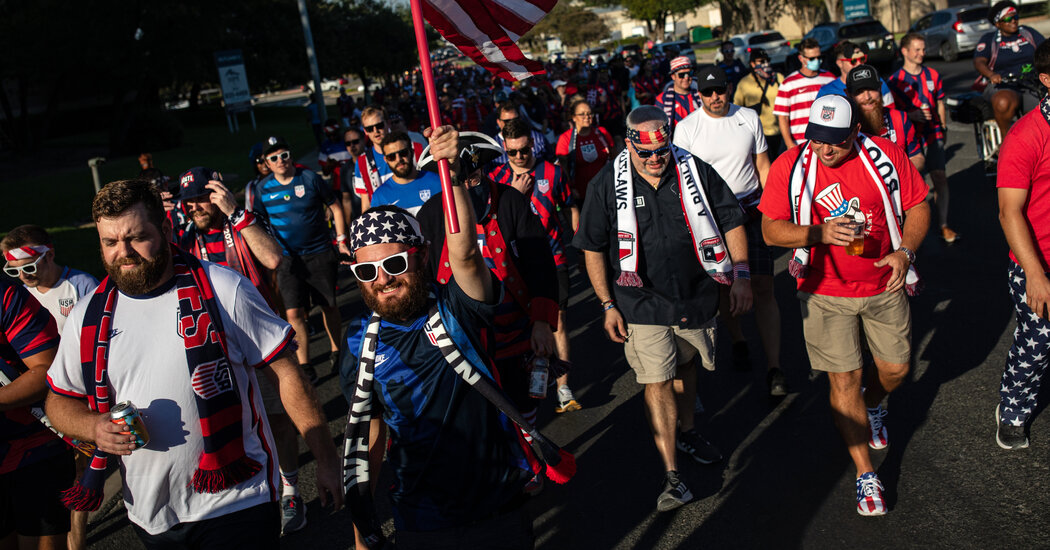