SIOUX CITY — The Sioux City Hotel & Conference Center has closed down.  Doors at the hotel have been boarded up, and a sign posted in an entrance at the skywalk level said the hotel is “permanently closed.” It’s not clear when the closure happened. Phone calls to the hotel […]

Doors at the hotel have been boarded up, and a sign posted in an entrance at the skywalk level said the hotel is “permanently closed.” It’s not clear when the closure happened. Phone calls to the hotel went unanswered.

The 12-story hotel opened in 1974 as a Hilton, and in more recent years had operated as a Howard Johnson. At the end of 2018, an entity called CSC Hospitality purchased the former Howard Johnson for $4.5 million and renamed it the Sioux City Hotel & Conference Center, which was the same name the hotel had carried for a time before it was the Howard Johnson.

Bob Zachariah, the hotel’s managing director and a longtime veteran of the hotel industry, said in 2019 that the hotel’s owners had big plans for the property, including extensive, 14-month renovations that would cost “quite a few million dollars.”

Zachariah said he hoped someday the hotel would fly the flag of a national chain — after it lost the Howard Johnson brand, it became one of the few hotels in Sioux City not affiliated with a national brand.

The COVID-19 pandemic struck the following year, and occupancy rates of hotels across the country were hit hard.

“We’re scrambling at the moment, we’re looking at multiple ways to bridge this shortfall,” Zachariah said in the spring of 2020, when travel had evaporated nationwide.

The hotel remained open at the time, but storm clouds were gathering. During the summer and fall of 2020, the hotel’s municipal skywalk charges had begun to pile up, and the unpaid balance had reached $19,517.31 — much of it past due — by the beginning of this year. The city had partnered with the hotel during the pandemic to provide shelter for dozens of homeless people.

Built as part of a downtown urban renewal campaign in the 1970s, the hotel was once one of the premier hotels in Sioux City, but more recently the property had fallen on hard times. City leaders blamed the hotel’s declining condition and poorly-run operations for a loss of business at the city-owned Convention Center, which is across the street.

The hotel had been the only one connected to the Convention Center, until the opening of the Courtyard by Marriott hotel adjacent to the Convention Center last year. Sioux City Councilman Alex Watters said this month that he wished the city could’ve purchased the property and used the site as part of the reinvestment district, rather than building a new hotel.

“But the fact of the matter is, every time we went to that property, it was in a price point that we couldn’t work with, so we weren’t able to buy that,” Watters told the Journal in an interview. “I think about that a lot — that I wish we would’ve. I’m hopeful for that to be developed in the future, because I think there’s a real opportunity and that an investor wants to capitalize on the momentum that we’re experiencing.”

The property changed hands repeatedly in recent years. After one ownership change, it was called the Sioux City Hotel & Conference Center, the same name as it had after the 2019 sale.

In 2014, the hotel went through foreclosure and a sheriff’s sale. A year later, the hotel became affiliated with the chain that owns the Howard Johnson brand.

The succession of owners tried upgrades and renovations, including new beds, flat-screen TVs, mini-refrigerators and microwave ovens in guest rooms and extensive pool repairs. In the winter of 2017-18, the hotel was plagued at least twice by minor flooding after water lines broke.

Yes, flights are definitely changing. No, you don’t have to live with it

Thu Oct 28 , 2021
According to the website FlightAware, which tracks scheduled flights, airline delays, and cancellations, flight changes like Cho’s are more common now than they were before the pandemic. FlightAware reports that in August Southwest Airlines scheduled 106,171 flights, of which 3.2 percent (3,433) were canceled and 30 percent (30,773) were delayed. […] 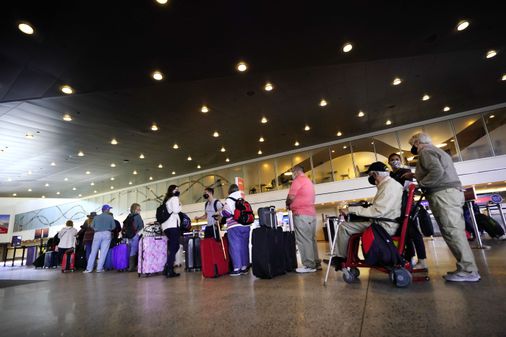