While the donkeys Rick Ramseur has in his pasture probably wouldn’t be willing to pull the surrey that he recently refurbished, their ancestors did. “My grandfather, Richard Alexis Ramseur, was in the hardware business,” he said. “He took it over from his father. He always wanted to have a farm […]

While the donkeys Rick Ramseur has in his pasture probably wouldn’t be willing to pull the surrey that he recently refurbished, their ancestors did.

“My grandfather, Richard Alexis Ramseur, was in the hardware business,” he said. “He took it over from his father. He always wanted to have a farm when he retired. Finally, when he hit 65, he did just that. We had every animal imaginable. If it were today, we’d have had a llama and an emu.”

Ramseur’s grandfather saw an advertisement in a Wilmington paper for two Sicilian donkeys for sale.

“He inquired, then rented a truck and went down to Wilmington and brought those donkeys home,” he said. “They were named Jack and Jill. We still have the descendants of donkeys to this day. Obviously, he wanted to show them off and acquire a vehicle that they could pull.”

About that time, the old Brevard Plantation in the eastern side of the came up for sale, Ramseur believes it was in the early 1930s. Ramseur’s grandfather purchased the base of the surrey at that sale. The wood had rotted out by the time it was sold.

“The reason that he purchased that surrey is rumor had it that among other dignitaries who had ridden in it, one was Gen. Stonewall Jackson who married Anna Morrison,” Ramseur said. “It’s quite plausible that while they were courting, they rode in it. Bill Beam, the county historian, said that the surrey was likely manufactured in Lincolnton.”

The surrey was kept in seclusion until Ramseur’s grandfather had time to refurbish it, which he believes was in 1947.

“He enjoyed being in various Christmas parades and maybe Fourth of July parades,” he said. “It was something that he looked forward to. He had the first-born pair of donkeys from Jack and Jill, Jack and Trinket, trained to pull it.”

Over time, the surrey had deteriorated again and during the pandemic, Ramseur decided to restore it again.

“I started it about a year ago lying on my back with a grinder, grinding all of the rust off the bottom,” he said. “It was a painstaking process – particularly with the lanterns which were almost completely rusted away. I had to rebuild them with layers of epoxy and other pieces of metal to get them back to where they looked like what they were intended to be. They are the original lanterns and probably worth more than the surrey itself.”

The upholstery was refurbished by New Era Upholstery in Lincolnton.

When Ramseur’s grandfather purchased the original pair of Sicilian donkeys, there were only seven other farms in the United States who had them. This type of donkey originated in Sicily, Sardinia and are miniature – reaching a maximum height of 36 inches tall. They are typically a light gray brown in color with dark markings on their ears and feet. They have dark manes that extend to a stripe down their backs and another across the shoulders forming the shape of a cross. They’re sometimes called “holy cross donkeys.”

“When I’m driving through the country, if I see some miniature donkeys, I can tell if they came from Jack and Jill because their head structure is distinct,” he said. “We’ve sold them over the years to cattle and goat people who want them as defense against coyotes.”

Because of Ramseur’s age and the amount of work that it would take to break a team of donkeys in, it’s unlikely that the surrey will ever be pulled by Ramseur donkeys again.

“We also had saddles and we’d ride them,” he said. “We had a sulky cart in addition to the surrey. We also had a covered wagon. The donkeys are wonderful pets. We’re down to just four donkeys now. At one time I think we had as many as 20. There have been hundreds born here since the late 1940s. They can live to be 35 or 40 years old. I know Jill had colts up until her late 20s. Our Jack now is 29 I think.”

Sat Jan 29 , 2022
With passenger numbers still low due to the pandemic, airlines are being forced to fly empty ‘ghost flights’ in order to keep their airport slots. The issue hit the headlines earlier this year when German flag carrier Lufthansa said that it would have to run 18,000 half-empty flights. The practice […] 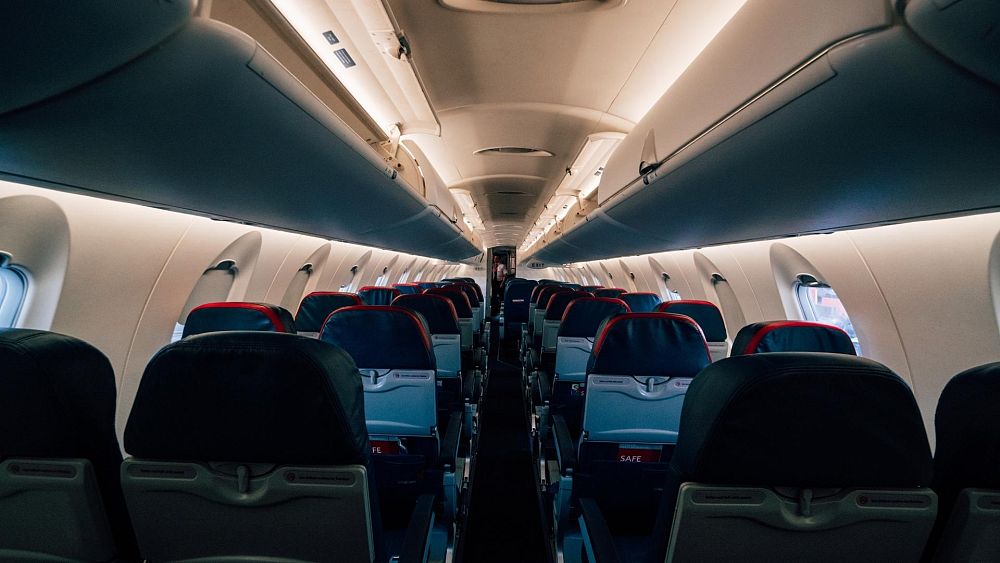