A local labor union is calling for a boycott of a Columbia hotel that has not rehired any workers laid off in spring 2020, despite receiving about $2.5 million in federal Paycheck Protection Program loans. Unite Here Local 7, the union that represents hospitality and food service workers in the […]

A local labor union is calling for a boycott of a Columbia hotel that has not rehired any workers laid off in spring 2020, despite receiving about $2.5 million in federal Paycheck Protection Program loans.

Unite Here Local 7, the union that represents hospitality and food service workers in the area, says the Merriweather Lakehouse Hotel laid off 111 of its members as a result of the COVID-19 pandemic. Of those, about 70 would like to return, according to union staff director Tracy Lingo.

Union members had recall rights under their contract, but those expired after workers were laid off for a full year.

According to Paul Burgin, a lawyer with the firm Shawe Rosenthal LLP who is representing IMH Columbia, LLC, the hotel’s owner, recall rights expired on April 1 of this year, and the union’s contract ended on June 30.

“At this time, the Hotel is not open, nor has it hired any hourly employees associated with hotel operations,” Burgin wrote in a statement. “All former employees are welcome to apply for open positions, and the Hotel will consider all candidates on a non-discriminatory basis based on their qualifications.”

The hotel has been undergoing renovations as part of a rebranding effort. Burgin said the hotel hopes to open at the end of October.

But the union says the hotel is open and hosting events already. Lingo said there was an event on Wednesday, for which the hotel hired an outside catering company.

The hotel has not posted any banquet-related jobs yet, said Sandra Mendoza, who worked as a banquet supervisor there until she was laid off in spring 2020.

Mendoza’s whole face lights up when she talks about her time running events at the hotel.

“I love it,” she said during an interview Monday. “We meet all kinds of people in the fun times when we had events like weddings, bar mitzvahs, conferences, meetings.”

Mendoza worked at the hotel for 29 years. She started as a housekeeper before moving to food service. She worked as a server, bartender, and for the last five years, banquet supervisor.

“With my experience through those years working in the hotel, I know what to do,” she said.

When the hotel needed someone to set up the buffet or fill in for an absent bartender, Mendoza said she was ready to do it.

“I would take care of everything,” she said. “Most important, my guests — make them happy.”

When she was laid off, Mendoza got a job working part-time at Home Depot. She was recently promoted to full-time, but she’s still making just $13 an hour, about half what she was making at the hotel after gratuities, she said.

She holds out hope that she will be able to return to the job she loves.

In the meantime, Unite Here Local 7 is calling for a boycott of the hotel. So far, about a dozen labor unions, progressive groups and Democratic lawmakers said they will not hold events at the hotel.

During a protest outside the hotel Wednesday, Howard County Councilwoman Christiana Rigby, one of the lawmakers who has agreed to the boycott, highlighted two federal Paycheck Protection Program loans the hotel’s owner received.

“These loans have the specific purpose of preserving jobs,” said Rigby, “and yet, the hotel has not paid their laid off employees or brought them back to work.”

“If a company did not use their funding — their loan — for the purpose of keeping their employees paid, then they did not follow the spirit of the Paycheck Protection Program,” Hatch said.

Kelvin Anderson, a banquet houseman at the hotel, described feeling betrayed when he learned about the loans.

“I struggled for a whole year — didn’t know where my next meal was gonna come from, didn’t know if my car was gonna get taken, or none of that — and this is the only thing that I had and hoped for, to come back to,” the 56 year old said after Wednesday’s protest. “And then to find out that it was opening back up and we haven’t been called and also he had two PPP loans that was taken out on the assumption of having us — or helping us out during the pandemic, was unacceptable.”

What America Proved About Its Travel Ban

Thu Sep 23 , 2021
When the United States announced this week that it would relax its ban on travelers from Europe and other countries after 18 long months, the goal was not to aid the suffering travel sector, nor was it to appease frustrated European travelers who spent much of the summer watching Americans […] 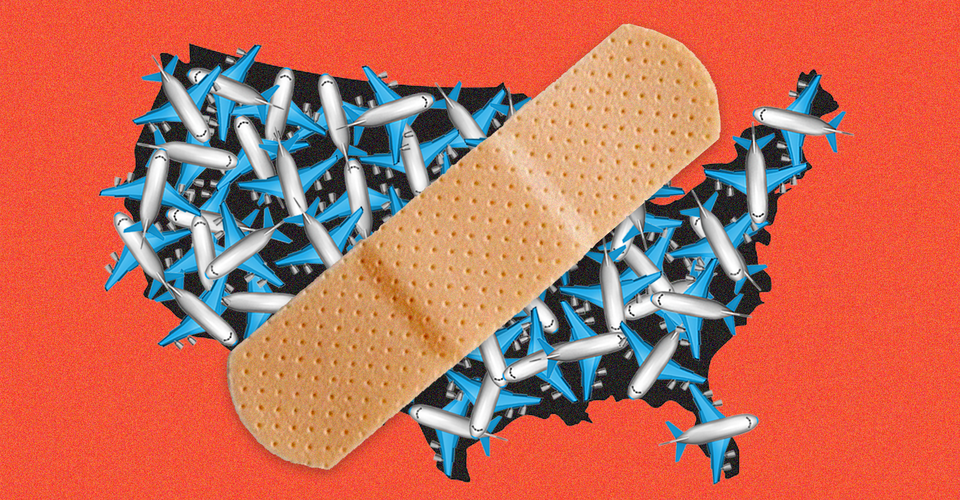